Posted by Cecil Veda Gallery at Friday, August 10, 2012 No comments: Links to this post 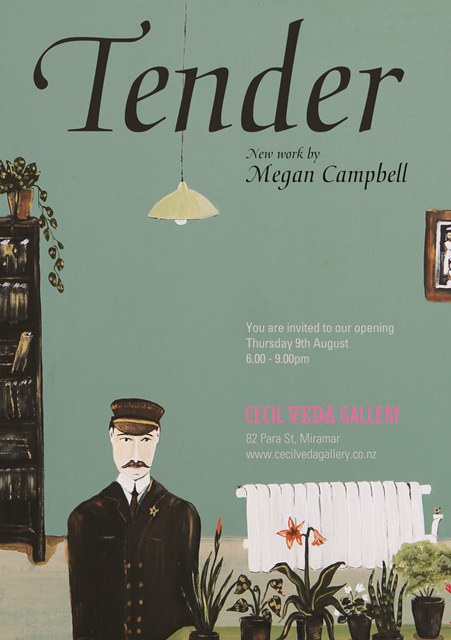 Posted by Cecil Veda Gallery at Sunday, August 05, 2012 No comments: Links to this post

We are One! And to celebrate this we have a tremendous show of painting on at the moment. Featuring  new work from Denys Watkins, Martin Poppelwell, Simon Shepheard, Tom Sladden, Megan Campbell, Angus Walker, John Callaghan and Leslie Falls. 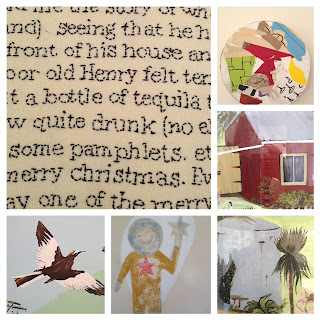 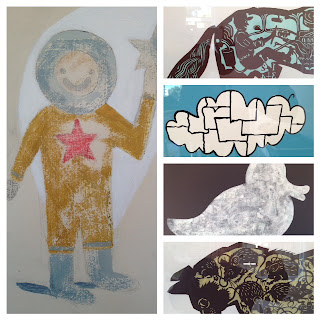 See you soon!
Posted by Cecil Veda Gallery at Wednesday, June 27, 2012 No comments: Links to this post

Charlotte Andrew has recently returned from living in the UK and has brought back a series of wonderfully whimsical material based constructs based around the four seasons.
We are showing two pieces from her Summer Series; ‘Angel’ and ‘Belladonna’. Andrew uses clothing- in this instance clothes discarded by her children……”the family walks in drops its clothes, walks out and buys some more. Sheds its skin like a cicada……”
‘Angel’ really soars! With a wingspan of close to a meter, the pale grey cloth requires close scrutiny to locate the beautifully hand embroidered summer flower motif at its core. This seems to be deliberately camouflaged so as to draw the viewer right in …..then, back the viewer steps to take in the whole form again, making the realisation they are looking at a pair of the artists’ son’s jockey underpants.
Andrew describes the work like this….”captured and held, the garments deconstructed enough to be pinned flat like a caught butterfly….” There is a sort of nostalgic element at play here, but the works are far from sentimental. Raising children in a foreign country has been all consuming for the artist, but these works offer a view forward not back. The lightness, sleight of hand and wit employed, reveal someone on the lookout for new terrain to stake out.  What has been before can now become grist for her creative mill as she moves into the next phase of her life.
Tom Sladden has produced a rocket. ‘Sure Wealth’ has been on the drawing board for several years and has gone through many transformations. Here’s what he has to say about it ;
“…the first attempt was a series of bolted together ‘failed’ paintings that were configured in a vertical fashion to form an Apollo-esque structure. The idea being the whole is greater than the sum of the parts … I was interested in proving that success can often be attributed to a series of failures so long as you keep heading in the right direction.
Over time the work has transformed- parts were lost or used elsewhere, I introduced the ‘Lady Luck’ fortune reader component and the whole thing took on more of a ‘product’ like feel. But at its heart the work is still about scrabbling together a solution from what is at hand- and aiming high…”
Andrew Missen’s ‘1970’ is blooming off our east wall. Beautifully constructed from Holden bumpers, ‘1970’ is a bit like Charlotte Andrews’ pinned butterfly clothing, except in this case it is like a giant chromed ‘pressed flower’ from an earlier time- come and check it out!
Simon Shepheard has sent down from Auckland two classic ‘Shepheards’ where he has intervened with two different surfaces both carrying their own history, in ‘Speakers Corner’ and ‘Post Colonial Swamp’. Simon has recently had a retrospectively styled show at Auckland’s Bath St Gallery.
Come and have a look......
Posted by Cecil Veda Gallery at Tuesday, May 15, 2012 No comments: Links to this post

February races by, even a leap year ‘bonus day’ isn’t going to stop us crashing into March with unseemly speed.
Leisa and I went to the [re] opening of Collecting Contemporary at Te Papa, in particular to catch up with Martin Poppelwell whose wonderful ‘Study for Strip’ is still on display.  Have a look at this link, Martin describes how he went about putting the display together...
http://www.youtube.com/user/tepapamuseum/featured
Martin investigates language, design and the role art plays in such matters as politics. He has created an extraordinary dinner set or table arrangement that uses the ubiquitous nature of such objects as they evoke the sense of rituals- both daily and in turn leading onto more significant types of ritual.
As humans we are attracted to each other through objects that we utilise to discuss or celebrate various points in our lives. 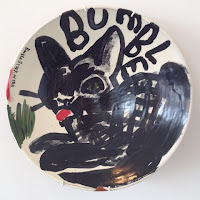 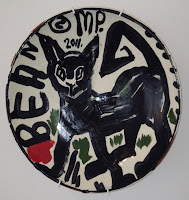 Here at CVG we have four wonderful ceramic pieces and two wall pieces of Martins- ‘study of Odysseus’ and an artists proof of ‘study for a badpie chart’ . 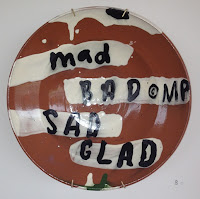 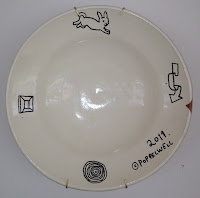 See you soon
Posted by Cecil Veda Gallery at Thursday, February 23, 2012 No comments: Links to this post

We are back up and running and looking forward to a great 2012. On Wednesday 15th Feb we are having an opening for our first show of the year. So come and have a glass of wine and catch up, plus check out some great new work from Martin Poppelwell, Tao Wells, Nigel Royal and Eion Stevens amongst others. 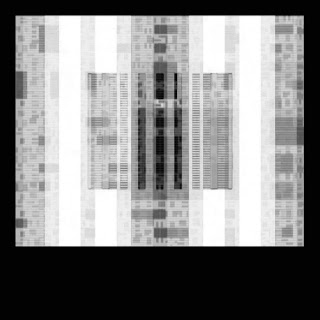 Nigel Royal - Binary State 00489 negative
Nigel Royal has produced two stunning ‘stills’ from his Binary State series. These are one off lambda prints that have a genesis in the sounds and symbols that represent the elements of human language and communication.
Royal experiments with theories based on the psychology of perception and applies them to the moving image and sound- both analogue and digital. By working across various technologies, remediating and manipulating them within the computer, he in turn creates new sounds and forms new images. 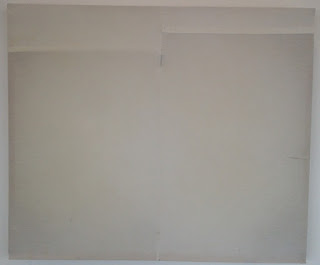 Tao Wells - Ripped White, number 3
Tao Wells probably set out to undermine certain artistic sensibilities. He has made a series of homemade stretcher frames from scrap timber and then stopped and looked around.
The need to present a surface, to ‘front up’, tell the story, make some [re]mark, is an obligation of our garden variety visual artist. It is also the point that Wells departs the garden path, so to speak, and heads off into the overgrown municipal green belt. From the humblest ‘cap in hand’ beginnings Wells has [possibly] inadvertently created the sublime art object….and the answer has been under our noses the whole time!
Posted by Cecil Veda Gallery at Tuesday, February 14, 2012 1 comment: Links to this post

...but here at Cecil Veda we are excited because with November of course come the Peonies, and we have a direct link to the grower, so we will be supplying you these wonderful flowers at a highly competitive price throughout the season.  Feel free to order through our email or call us on 3887311, to save disappointment.

Work wise this month we have taken a dichotomous approach to the gallery space with a predominantly two person show of work by Geoffrey Notman and Leslie Falls (http://www.lesliefalls.com/)
Notman has been working in what could be described as a hyper- realistic style for the past ten years. He has been painting very much about the ‘everyman’ with an acute scrutiny of human foibles, but at the same time an overriding empathy for his subject that takes it into a much more compelling and readable territory. These aren’t ‘box office blockbusters’, but more the hand of an auteur at an indie festival.


Notman is now on the move from the outrageously detailed work of the last few years. He has stepped back and let information pass through a filter- flat colour planes appear. Even the underpainting or ‘ground’ shows up from time to time, enabling the formal elements of his process to align more with the subject. It’s not a perfect world, we are all flawed, but within this paradigm lies a form of utopia accessible to all and sundry. 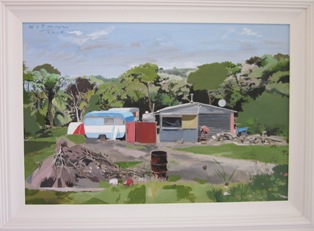 Chicago born artist Leslie Falls work explores the affective gratification experienced throughout creative activity- in her case, hard labour! In this series of works, Falls’ substrates are old woollen blankets. She then stitches and pins the surfaces in a monumental and fastidious endeavour in which she explores values of  task and accomplishment, productivity and pleasure and ultimately she establishes through a routine of ordinary activities the value of process over product.


Each stitch or puncture represents a momentary productive expenditure of time- and there are thousands of them. The results are remarkable and touchingly personal at times. ‘Love, Mimi’ is a beautiful transcript or more accurately a facsimile of a letter [embroidered by hand] to the artist from her grandmother with exquisitely stitched on vintage beads and sequins. The letter works tread that fine line between public and private activities. In this case they present as an extreme act of generosity from the artist. After reading them, you come away with an uplifting feeling of warmth, wellbeing and a funny sense of gratitude…what more could you ask for from a piece of art.


Posted by Cecil Veda Gallery at Wednesday, November 30, 2011 No comments: Links to this post

Cecil Veda Gallery
Our focus is art. In order to create something new and compelling we believe you need to have a strong understanding of what has gone before. The artists we have selected to show with us all have this contextual awareness to their work. Visual agility, curiosity, sensitivity to material, subtlety, irreverence, obsession, singlemindedness! are all qualities you will expect to see in the work we exhibit. 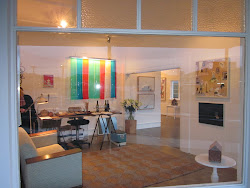 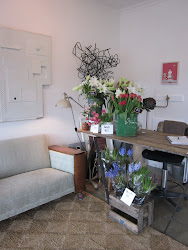